More Than Just a Soak!

Since the beginning of this project, we have been lucky enough to speak people who remember a great deal about the Brine Baths (The Royal Brine Baths, St Andrews and BMI – which are referred to as the baths here) and Droitwich. We have also heard from a number of people who have shorter stories and anecdotes to tell which have included the unusual, the life changing and the downright funny. These should not be lost, so we wanted to share some of these with you all! Our grateful thanks to everyone who has contributed.

The baths, through the ages, were a great place for a soak; a beauty treatment; somewhere to go to the gym; meet friends; have a game of cards; and to support your recovery from an accident and surgery. But they were also a great place to visit as a group, such as the WI from Olton (Warwickshire). It was so good they went twice in 1992. You could even have a celebration, such as a Hen Party with a ploughman’s, made in the hospital kitchen, and a cider – much more affordable than Tenerife! Not getting married? How about repeating the Christmas celebration in 1937 with cocktails and appetisers floating on little tables on the water? No? Well would you expect to meet your future husband there? Karyl said that her parents-in-law met at the baths in 1944/5. Douglas was from Wales and was having treatment for his rheumatism; Mary was a nurse visiting with a friend. Whilst at the baths, the girls were being harassed by a couple of young men. Having met Douglas, ‘who looked like a policeman’, they decided to go with him to the safety of the café to get away from the young men. Douglas and Mary were inseparable ever since! But beware if you needed to look your best – you might end up with a beard of white salt or a faded swimsuit like Caroline who explained ‘I went for a relaxing float in the brine baths when I was quite heavily pregnant. When I got out, the brine had taken all the colour out of my swimsuit except the big bump on my front!’ 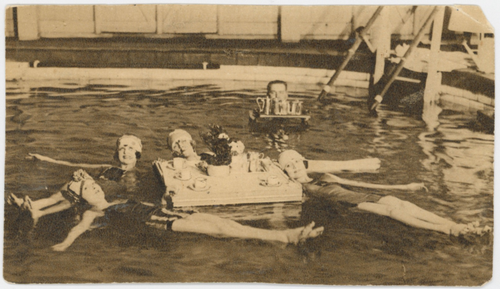 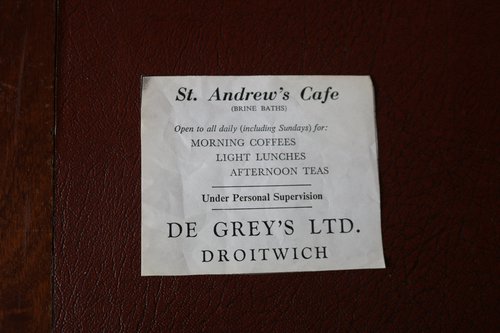 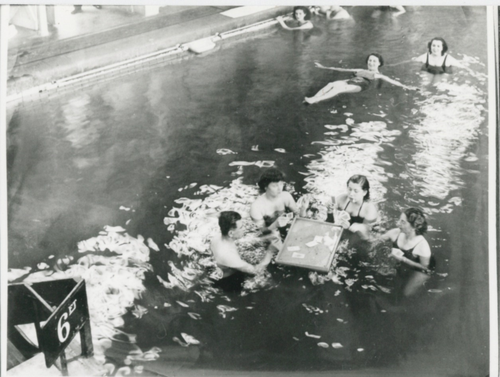 Perhaps you were just looking for somewhere to have some refreshments; the baths had that too. No need even to go in the water; although if you did, you could have your tea and cake pushed to you on a tray on the water or even brought to you in the water in the 1920s. There was a good lunch time menu at the café, which was situated either at the entrance or by the poolside itself.

Did you need refreshments? Indeed, you did! Fiona D remembers that in the early 1990s they had vouchers which included a club sandwich lunch with wine, a massage and a soak. Sounds heavenly! It was hard work though – 30 minutes in the water, ‘which felt like silk wading through pea soup’ or ‘paddling like a human lido’ and you too needed to be ‘spark out’ on the sun loungers by now wrapped in a white towelling gown. Sadly, the towelling gowns had replaced the huge white towels that so many people have spoken about; these wrapped you from head to toe; you had to shuffle to your seat and not rub anything while you dried. Think of all the towels they must have needed to wash and dry. There must have been a huge laundry to deal with that when the baths were so busy. John knew all about the laundry because …… ssshhhh .. his family would get their weekly laundry done for free! Helping each other did not stop there; you might even get into the baths free if a friend or relative was on the door – ‘You scratch my back and I’ll scratch yours’!

As a child, the baths might have been almost magical to some including Fiona G who suffered from ‘abject horror every time’ she had to go to her swimming lessons in Stourbridge. So, her parents brought her in 1974 to ‘a large old-fashioned pool in Droitwich’ where she was told she would be able to float. She did not remember what she thought of that but does remember her feet coming off the ground and floating! ‘I don’t remember it with horror but it was not a miracle cure’ it still took another 5-6 years for her to learn to swim! At least she did not swallow any water to be rushed off like Janet; or see people vomit at the side of the baths; or spit into the trough found there. Even the attendants could be scary – looking like Agatha Trunchbull from Matilda!

So perhaps you had to be an adult to really appreciate how special any of the baths were. Heather told us a funny story, which is a reminder to us all – don’t count your chickens before they hatch. She discovered that you could buy gift cards to give to people to use the baths. Her daughter, who didn’t live in Droitwich, loved going to the baths so much that she too bought a gift card pass for two people to give to a friend in the hope that she would be the other person invited. But alas she was severely disappointed that she wasn’t invited. I don’t think she gave away gift card passes again!