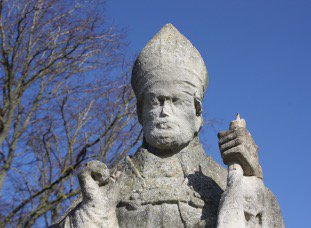 Possibly the most famous “son of Droitwich” is Richard de Wyche, who was born here in 1197, became a respected scholar, a revered archbishop and ultimately a saint. While the deeds and works for which he became known were mainly performed well to the south of Droitwich, one episode famously brought him back to his home town – and arguably, made us what we are today.

To the manor born - not

Born in a manor house on the site of today’s Raven Hotel (which our Salt King, John Corbett, opened exactly 700 years later, in 1897), Richard de Wyche was technically privileged. In fact, the family was so heavily in debt it was a case of “all hands to the tiller”. From an early age he worked the fields and developed an exemplary work ethic. This clearly stood him in good stead when he left the town to go and study at Oxford University. There, and also later in Paris and Bologna, he studied “Logic” and canon law, becoming a respected scholar and the chancellor of the university.

Practise what you preach

De Wyche did not formally enter the church until 1240 – although he was said to live a frugal and monastic life throughout his time in academia. But he had a phenomenal rise through the ranks thereafter, and was appointed Bishop of Chichester in 1244.

This was a time when, from parish priests to popes, there were countless examples of preaching high but living low. Richard de Wyche was a shining exception to this rule. He waged war on corruption, threw out clergy who broke the rules or moral code and shared the income from his see with the poor and needy. It is perhaps not surprising that his shrine was a popular place of pilgrimage for centuries after his death. 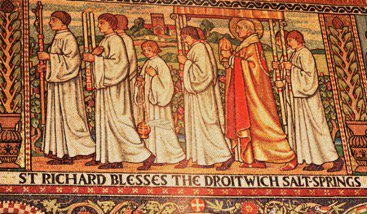 At some point between 1247 and 1249, the salters of Droitwich appealed to their famous son for help – in the form of divine intervention. The brine springs, that had ensured employment for all and prosperity for some, had dried up. The town was in crisis. Richard obliged: he came to Droitwich, blessed the springs – and they started to flow again.

This gave the town another 700 or so years of making a living from brine in one form or another. Just think how different it could have been!

A feast for Lent

The exact date of Saint Richard’s birth is not known, but his death is. He died on 3rd April 1253. He was canonised in 1262 and his Feast Day was declared to be 3rd April. The miracle(s) associated with sainthood were deemed by the church to be incidences of healing experienced by visitors to his shrine in Chichester. But the blessing of our brine pits and their subsequent “springing” back to life was pretty miraculous, wouldn’t you say?

Incidentally, because April 3rd so often falls in Lent, some parts of the church decided to celebrate his Feast Day in June (the 16th, to be precise).

This year – 2021 - there is no conflict, as April 3rd is officially the last day of Lent. So, in raising a glass to our famous son on his special day, we can also wish you all a happy Easter!